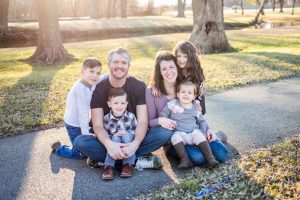 Jared was born in Tallahassee, Fl on July 17, 1980.  Shortly after his family moved to Denver, Co and then to Indiana when Jared was in 7th grade.  He is the 2nd born of 4 sons.  Jared grew up in a strong christian home, the son of an associate pastor and music minister.
Jared came to know Jesus at the young age of 6 and was baptized shortly after and though there have been ups and downs in his walk with Christ, he has no doubt of his salvation and continues to strive after the things of God.  Jared graduated high school in 1998 with no real clue as to what was next for him.  The ministry was far from his mind and was just a bit lost in life.  He met his mentor John when he was 21 years old.  John was 70 at the time but began to mentor Jared.  Jared and John began to pray and read the word together.  During that time Jared completed his bachelor’s degree in communications from IUPUI in Indianapolis as well as his master’s degree in Christian Eduction from the Southern Baptist Theological Seminary in Louisville, Ky.  With John’s help God finally seem to have Jared right where he wanted him and full-time vocational ministry was the plan.
During this time Jared also met the women God had for him.  During Jared’s time as a college pastor his wife to be, whitney began serving on the worship team.  Jared and Whitney were married in 2008 and the same year began to serve at a church in Denton, Tx.  Whitney and Jared have 4 children: Tucker, Piper, Brooks, and Blair.
Jared is an avid hunter, when he has the time, and loves food way too much.  But mostly enjoys just being with his family and exploring new places and having new adventures together.
Jared and Whitney have been serving at The Sanctuary since July of 2019 and are continually excited about what God has planned for His church.